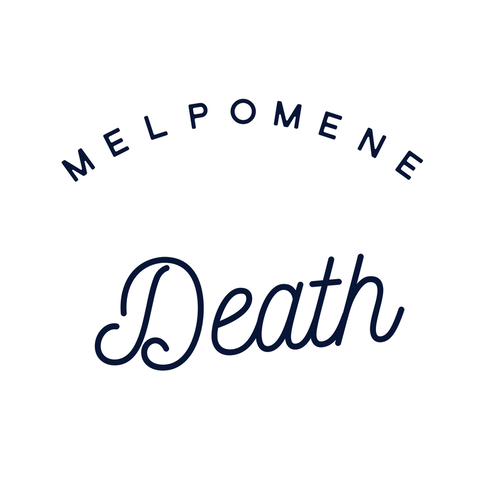 …Curious, here behold my resurrection, after
slumber;
The revolving cycles, in their wide sweep, have
brought me again,
Amorous, mature - all beautiful to me - all
wondrous…
Walt Whitman
week 8

Melpomene is the muse of tragedy, and her name means, “to sing sacred songs of sorrow.” She shares with us the importance of expressing anything to do with tragedy- grief, loss, disappointment, sorrow, failure, fear… any emotions that arise when we think about endings. The word tragedy derives from the Greek word ‘tragoidia’, meaning “goat-song”. Author Angeles Arrien talks about how the first tragedies were myths that were sung by dancers wearing goat-skins in honour of the god Dionysos, who was the god of wine and living life fully. So part of Melpomene’s message is that a tragedy is when a life is not lived to its fullest.

Death, in its most literal sense, provides us with a profound connection to everything. Quite simply, when we’ve experienced death, we experience the full circle of life, and therefore have a deeper understanding of- and a greater appreciation for- the life we are living. It’s a cliché, but death gives us more awareness of its opposite.

However, when I talk about death I am also referring to the metaphorical meaning, so I’m speaking to this idea that life works in cycles and things are reborn after they die. We have forgotten this somewhat in recent times, prescribing to the idea that we can somehow cheat death and work towards a never-ending goal of productivity, progress and agelessness. Whereas many ancient cultures, including anglo-saxon peoples, have subscribed to this view of cycles for centuries, and it appears to be making a resurgence in small ways.

We can witness these cycles in many different parts of life. We see it in the seasons, in the journey of the moon, and in the female body during the process of menstruation. This notion of life/death/life connects with cycles of creativity too, and we bear witness to this in the story of Persephone. Persephone is the queen of the underworld in Greek myth, but she wasn’t always so. She was abducted by lord of the underworld, Hades, as a mere maiden roaming the fields one day. During her absence, her mother, Demeter- who is the goddess of the harvest, became distraught with grief. So much so, that she abandoned her duties as the caretaker of all agriculture, and the once fertile land became dull and stagnant. Death crept over all the crops and plants, and thus the world experienced its first winter. Eventually, Demeter was able to negotiate with Hades (with whom Persephone had by this stage fallen in love) and it was decided that Persephone would spend half the year in the underworld and half the year on the top side. When she was returned to Demeter, her mother’s joy caused all living flora to explode into life once more, creating Spring.

The same process happens with our creative self-expression. There will be times when our productivity wanes because we need to visit our own underworld. Perhaps we’ve reached a rite of passage like Persephone did by progressing from maiden to Queen. Or maybe the work we’ve been creating becomes stagnant and needs to be rebirthed with a new vigour and a different direction. Either way, there are times for inhalation, inwardness and inspiration, and times for exhalation, extraversion and expression. The trick is to have both the courage and patience to sit with the times of death, so that our soul can marinate in its new form to luminously emerge from its chrysalis when Spring inevitably arrives yet again.
audio
inspiration | film & animation
​
Our inspiration for this week's theme comes from the mediums of film and animation. First up is a poignant animation on the relationship between life and death and making peace with our endings. The second clip is an animated telling of the Inuit folktale,  The Skeleton woman, about love and the death/rebirth cycle.

The Life of Death from Marsha Onderstijn on Vimeo.

Take 3 deep breaths to ground into your body. Then, sit with each image for as long as you need before writing, allowing the symbols to speak to you. Remember, it's best not to think too much about your answers if you can- try to let them run off the pen. 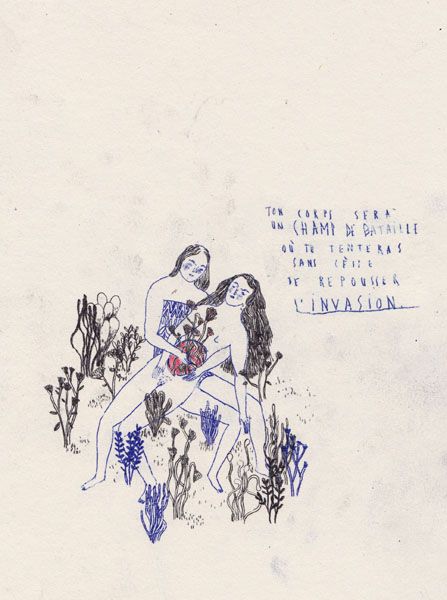 Art by Sophie Lécuyer
This image could be interpreted as a woman being accompanied by a figure during death. She does also have something growing from her stomach/womb area though. What is happening here from your perspective? Who is this death doula, and what plant is she harvesting? 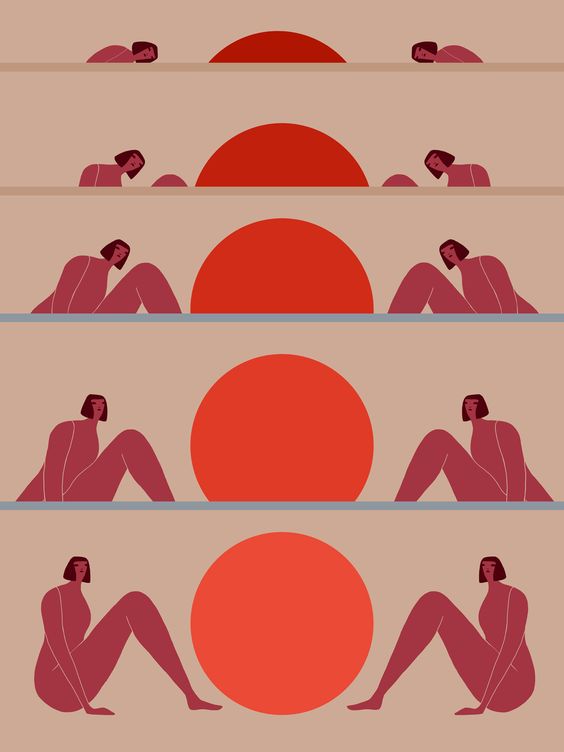 Art by Laura Berger
The moon, and a woman's menstrual cycle, are both examples of cycles in nature that embody a death/rebirth process. What are these two women feeling as they watch the moon grow to fullness?

Art by Claudia Wieser
What are some of your thoughts on death and cycles of change? Use each colour of the circle to list a perspective. What does the gold sphere in the centre represent, as a response to your musings on death?

Art by Ren Hang
Here we might be witnessing a person "giving birth" to another version of themselves. When was the last time you experienced a rebirth, a new part of your identity or chapter of life emerging? Did you experience birth pains? Describe it.
tension monologue

Within any kind of narrative, death and cycles inform conflict and tension within the story. Any plot contains change- this is what moves the narrative forward, just as in life. These conflicts don't need to be dramatic- often the most profound conflicts are in our inner world, as we grapple with the tension between the desire for safety and comfort and the desire to expand and grow.

For this week's writing exercise we're going to explore this tension through monologue. A monologue is a part of a theatre or film script that is written for a solo speech by one of the characters. It's designed to allow the character to express their inner thoughts. Write a monologue to an audience where you, or your character, tells the story of a recent conflict. This can be an internal conflict, say where you explore a decision you needed to make or your response to a life event, or it can be a reflection on a conflict with another person. Go into detail- how did the conflict come about? What were the two points that you were struggling between, and how did it feel? Did you manage to resolve the conflict, and if so, how?
outro

Did anything die off and rebirth with Melpomene's help this week? What did you learn about your approach to death and cycles in your life? Reflect on these and the myth of Persephone throughout the week.
further resources

Below is a clip from the film Stranger than Fiction, where Will Ferrell's character learns of his impending death as the hero character of a novel (but in fact the literal death is a symbol for the ending of a chapter of his life as he traverses the soul death/rebirth of the midlife crisis). If you can get your hands on the whole film I highly recommend it!